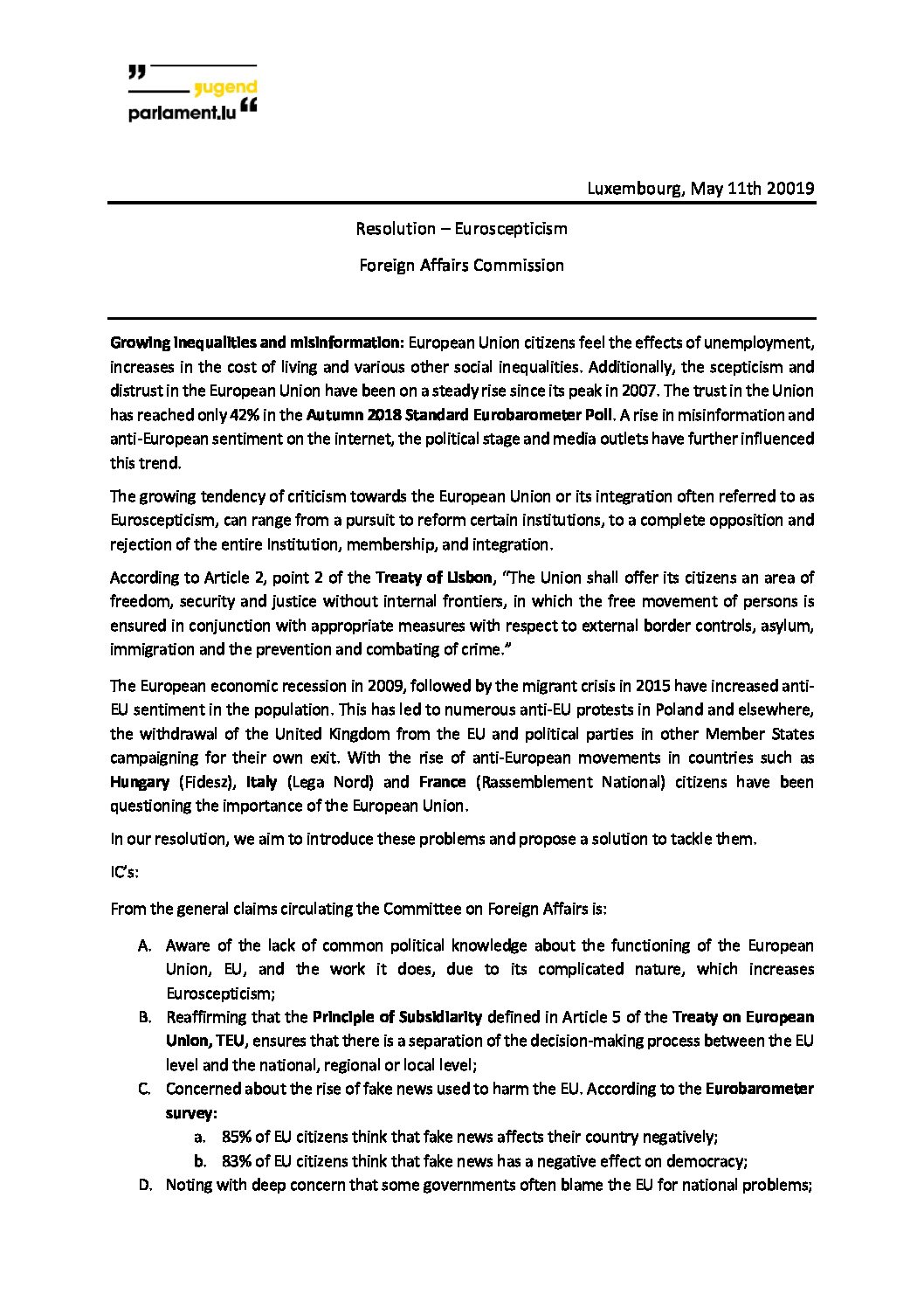 Growing inequalities and misinformation: European Union citizens feel the effects of unemployment,increases in the cost of living and various other social inequalities. Additionally, the scepticism and distrust in the European Union have been on a steady rise since its peak in 2007. The trust in the Union has reached only 42% in the Autumn 2018 Standard Eurobarometer Poll. A rise in misinformation and anti-European sentiment on the internet, the political stage and media outlets have further influenced this trend.
The growing tendency of criticism towards the European Union or its integration often referred to as Euroscepticism, can range from a pursuit to reform certain institutions, to a complete opposition and rejection of the entire Institution, membership, and integration. According to Article 2, point 2 of the Treaty of Lisbon, “The Union shall offer its citizens an area of
freedom, security and justice without internal frontiers, in which the free movement of persons is ensured in conjunction with appropriate measures with respect to external border controls, asylum,immigration and the prevention and combating of crime.”
The European economic recession in 2009, followed by the migrant crisis in 2015 have increased anti-EU sentiment in the population. This has led to numerous anti-EU protests in Poland and elsewhere, the withdrawal of the United Kingdom from the EU and political parties in other Member States
campaigning for their own exit. With the rise of anti-European movements in countries such as Hungary (Fidesz), Italy (Lega Nord) and France (Rassemblement National) citizens have been questioning the importance of the European Union.
In our resolution, we aim to introduce these problems and propose a solution to tackle them.

We may request cookies to be set on your device. We use cookies to let us know when you visit our websites, how you interact with us, to enrich your user experience, and to customize your relationship with our website.

Click on the different category headings to find out more. You can also change some of your preferences. Note that blocking some types of cookies may impact your experience on our websites and the services we are able to offer.

These cookies are strictly necessary to provide you with services available through our website and to use some of its features.

Because these cookies are strictly necessary to deliver the website, you cannot refuse them without impacting how our site functions. You can block or delete them by changing your browser settings and force blocking all cookies on this website.

We also use different external services like Google Webfonts, Google Maps and external Video providers. Since these providers may collect personal data like your IP address we allow you to block them here. Please be aware that this might heavily reduce the functionality and appearance of our site. Changes will take effect once you reload the page.